Germany-based secondary market research firm yStats.com, specializing in B2C E-Commerce and Online Payment market intelligence, has published a new report about the online retail development in Russia. “Russia B2C E-Commerce Market 2015” reveals that despite the overall economic downturn, online retail in the country continues to grow at double-digit rates due to its untapped potential.

Russia is one of the largest B2C E-Commerce markets in the world. In 2014, it ranked ninth worldwide, fourth in Europe and second among the BRIC countries in terms of online retail sales, according to yStats.com’s findings. Despite the economic crisis, Russia is predicted to see B2C E-Commerce sales grow at double-digit rates and maintain the mentioned global rankings in the foreseeable future.  Though overall retail sales are in a decline and consumer confidence is at an all-time low, the B2C E-Commerce market in Russia still has room for growth due to its untapped potential.

Though Russia’s online audience is the largest in Europe, Internet penetration was only at two-thirds of the adult population as of mid-2015, yStats.com’s report shows. Online shopper penetration has even more room for development, as only about a quarter of Internet users made purchases online last year. Interestingly, while Internet user penetration tends to be higher in the Central and North-Western regions of Russia, which include the country’s two largest cities, and lower in its other regions, in terms of online shopper penetration, Russia’s Far East and the Ural regions come close to matching the central areas. Furthermore, B2C E-Commerce’s share of total retail sales amounted to a small one-digit percentage share in 2014, also indicating potential for future growth. 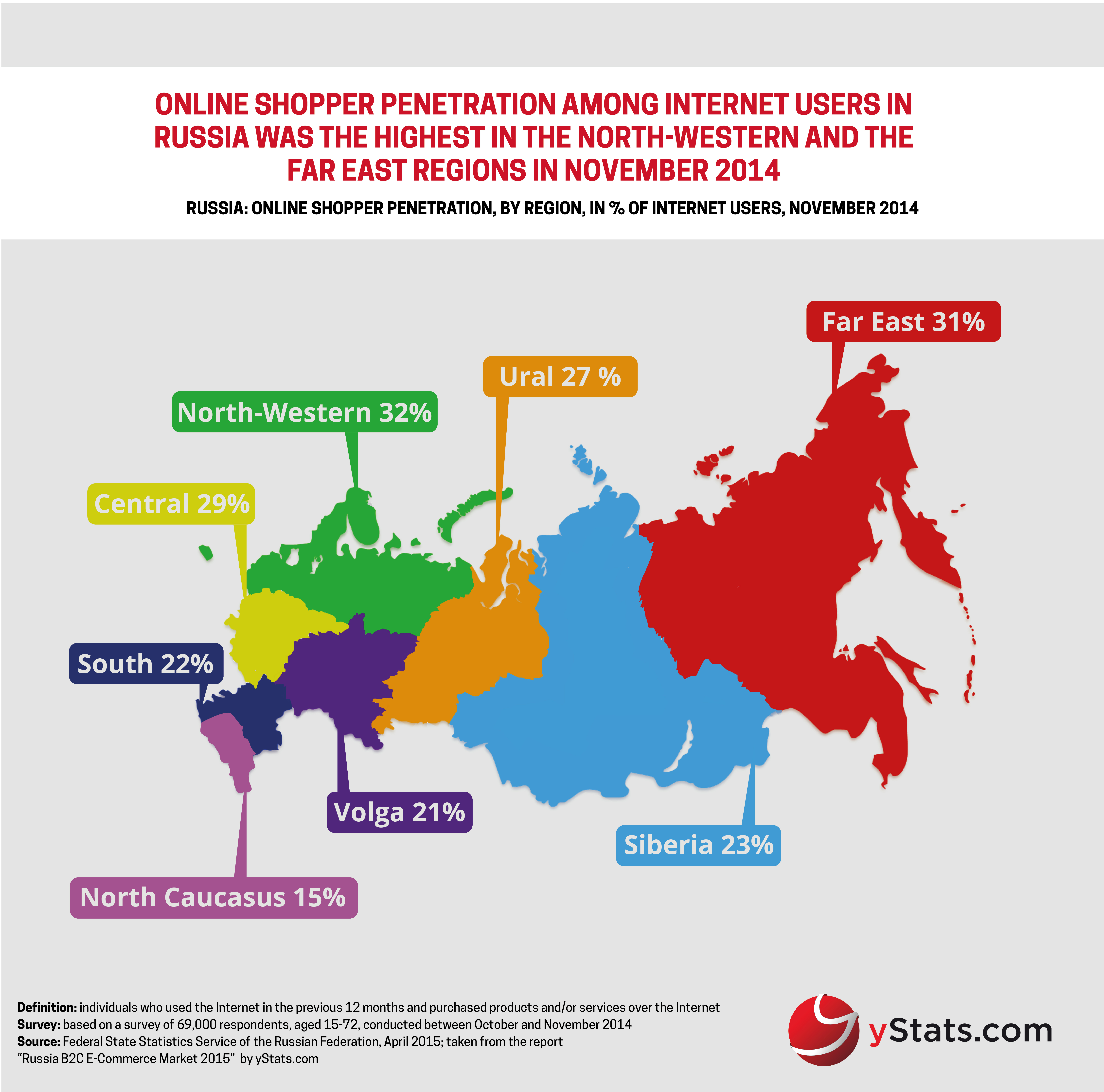 The growth trend is supported by evidence from the top online retailers in Russia, such as mass merchants Ozon and Ulmart, clothing merchants KupiVip and Lamoda, electronics and appliances stores M.Video, Eldorado and Svyaznoy, who reported sales increase in 2014 and expect further increase in 2015. On the other hand, there have also been noticeable market exits in late 2014 and 2015, including the closure of the online marketplace and auction Molotok.ru, children’s goods store Mamagazin.ru, and electronics merchant Utinet.ru. Furthermore, according to yStats.com’s report, a significant and growing share of B2C E-Commerce sales in Russia are due to cross-border import, especially from China, with both AliExpress and JD.com operating Russian versions of their websites to tap the growing demand.