As Internet connectivity improves and more consumers in Eastern Europe discover the convenience of purchasing over the Internet, online shopper penetration is rising. The region’s leader in these terms is Estonia, where nine in ten individuals had Internet access and more than six in ten made purchases online in 2018, according to statistics cited by yStats.com. However, in most countries of the region, both Internet and online shopper penetration rates remain below the Western European benchmarks, leaving room for further growth. 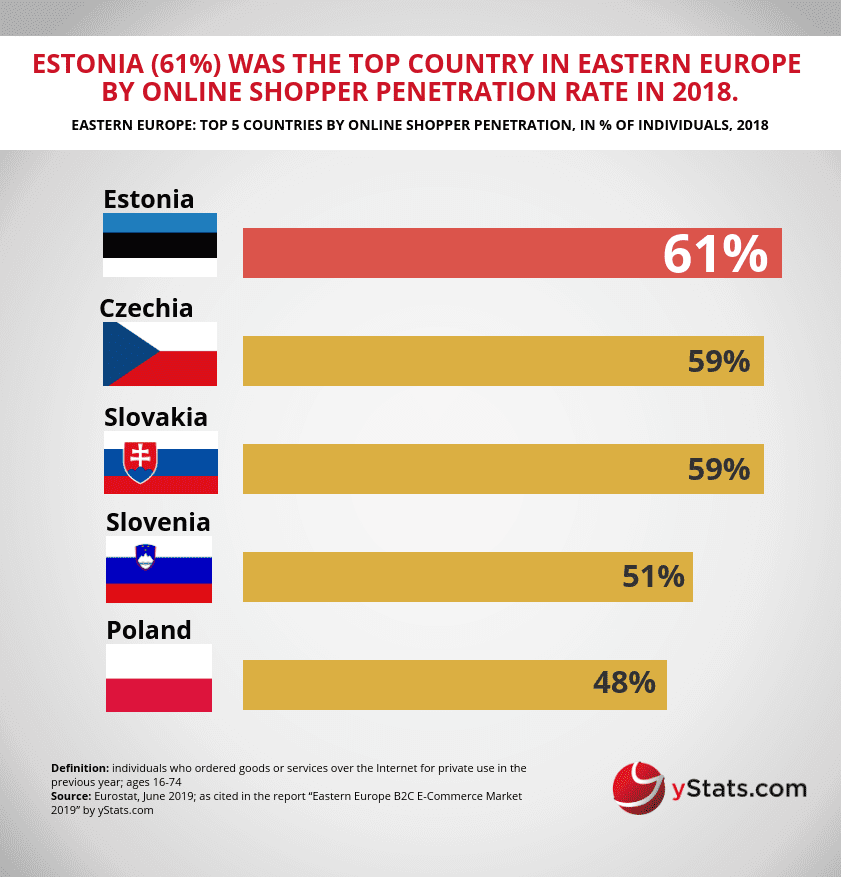 The top B2C E-Commerce market in Eastern Europe, and the tenth largest worldwide, is Russia. The relentless rise of online retail sales in this country is projected to continue, spurred by trends such as cross-border online shopping, especially from China. According to forecasts cited in the yStats.com report, B2C E-Commerce sales in Russia will see significant growth in 2019 and more than double by 2023. The leading market players benefitting from Russia’s expanding E-Commerce market opportunity include Wildberries, Citilink, Mvideo, and Ozon, who operate the largest online stores by sales.

Double-digit growth is also projected for online retail sales in other markets of Eastern Europe in 2019, including Poland, Czech Republic, Hungary, Ukraine, and others. The ability to compare products and prices is one of the top attractions of online shopping drawing more consumers to the E-Commerce channel. This trend helps price comparison group Heureka maintain a leading rank among the E-Commerce websites in multiple countries of Central and Eastern Europe. Other local top players include Poland’s Allegro, Romania-based eMag, Hepsiburada in Turkey and Rozetka in Ukraine. Furthermore, China-based cross-border platform AliExpress has gained major popularity among Eastern Europe’s price-sensitive shoppers.