Home > Media > Mobile > More than half of world B2C E-Commerce sales projected to be on mobile by 2021, new yStats.com market report reveals

More than half of world B2C E-Commerce sales projected to be on mobile by 2021, new yStats.com market report reveals

“Global M-Commerce 2017” has been released by yStats.com, Germany-based E-Commerce and Online Payments secondary research firm. Covering over 25 markets worldwide, the report contains a prediction that more than half of B2C E-Commerce sales worldwide will be on mobile by 2021, with several countries having already surpassed this threshold. The publication also cites market data and consumer surveys indicating that mobile apps are becoming the preferred way for consumers to interact with sellers on mobile platforms.

M-Commerce accounted for a double-digit share of global B2C E-Commerce sales in 2016 and is projected to top 50% by 2021, according to a forecast cited in this report by yStats.com. In some countries, such as China, South Korea, and India, the mobile share is already above one-half and continues growing. These three countries also had the highest share of Internet users who made a purchase via mobile apps in 2016, an emerging trend that is gaining traction across the world. Not only in Asia, but also in North America and Europe, apps dominated over mobile browsers in digital consumers’ preference. To meet this growing demand, a high double-digit share of the world’s top retailers plan to invest in mobile applications this year. 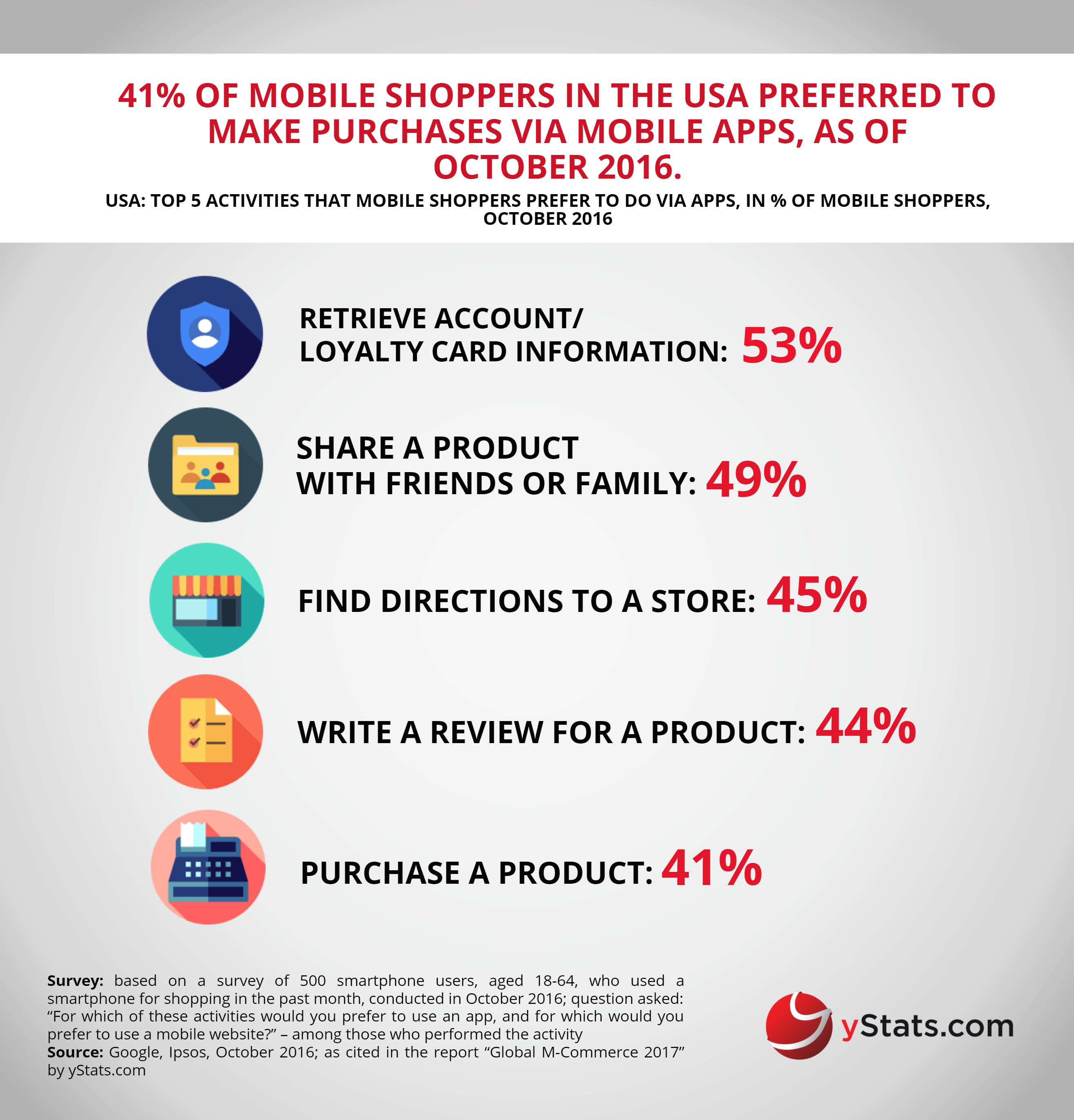 Clothes, electronics, books and games were among the top product categories purchased on mobile, as revealed by consumer surveys cited in yStats.com’s report. In the UK, the USA, and Russia food and groceries also ranked within the top 5. The convenience of purchasing on mobile and the ability to shop online from anywhere were among the top motivations driving mobile shoppers. For example, in Mexico, two-thirds of smartphone shoppers preferred this device due to availability of shopping applications that help them save time. Besides smartphones, tablets were also used by many mobile shoppers and even accounted for a higher share of M-Commerce orders in countries like Belgium and the Netherlands, though in both markets mobile transactions are growing faster on smartphones than on tablets.

Despite the rapid growth, some barriers to M-Commerce remain. For example, close to half of consumers in France named the security of personal data as an issue, and in the USA, secure access was the mobile shoppers’ top requirement to shopping applications, as yStats.com’s report reveals. Furthermore, there are still issues with mobile website usability, as close to one in three online buyers in emerging markets including Russia, South Africa, Brazil, as well as in tech-savvy Singapore and the advanced Switzerland, said that mobile websites weren’t easy to use. Nevertheless, the future of global M-Commerce is bright, as the growing smartphone penetration enables wider access to mobile shopping.